As with any craft, there comes a natural need to improve our skills in Web Development methods. We teach ourself new coding patterns, we try new development tools, new Editors, …

Yet it feels like WebDevelopers tend to focus too much on Software and completely ignore the hardware aspect of improvement. By hardware I mean our keyboards, our pointer devices, desks, and so on.

That’s why in this blog we will have a look at few of them.

Update I gave a lightning talk on this topic so if you are interested here is a video.

With Ten Finger Typing Technique typists are using all fingers to type. With left pinky on a QWERTY keyboard you type 1, q, a, z, Left ring finger 2, w, s, x, and so on.

When developers type with ten finger technique, we are using the full potential of our hands and fingers to type.

When developers type with freestyle typing technique they are loosing all the above benefits.

One of the biggest arguments against typing with Ten Finger Technique is that programmers and web-developers too often use special chars like {}"'/?\~ <> usually located on the right side of the keyboard, and therefore the right small finger (pinky) gets to tired (image above, yellow section).

Well, this is true, however the problem isn’t that the typing technique is bad, the problem is that QWERTY keyboard layout (as any other layout out there) was designed for different group of people (book writers, newspaper editors, …)

The QWERTY keyboard layout was designed so that the mechanical typewriter won’t jam. Layout designers did consider speed, but speed in terms of type faster when you don’t have to fix typewriter every 4 minutes.

Between 1914-1932 Dr August Dvorak and Wiliam Dealey designed new layout of keyboard designed for speed and less errors in typing called Dvorak Simplifiex Keyboard Layout. In experiments done on typists it was discovered that Dvorak layout was + 1/3 more effective in speed than QWERTY.

With your left hand typist type the vowels while his right hand is typing mostly used consonants.

Now this design choice brought very interesting side-effect for web-developers. Some of the special chars ("'<,>.) were moved to the left hand side of the layout. This doesn’t solve the right-hand little finger problem entirely but definitely helps a lot.

The reason why I recommend Dvorak is not necessarily because of typing speed but because the design is more comfortable to write code on.

There is also a Programmer Dvorak which suppose to be designed to even more improve productivity of typing for programmers / software developers however I’m not recommending it as it’s maybe way too different. I’ve tried it for a week was not suitable for me, maybe it well be for you.

Usually the question I get from people is: “But where would I buy a MacBook with Dvorak?”. Well, simply you don’t have to. If you use 10 finger technique you don’t need to see the keys, your brain knows where the keys are. Sure, you can buy a mechanical keyboard and reposition the key, but that’s not the point. The layout is in your head.

Once again Dvorak is only effective if you are going to use 10 finger technique. If you are a designer where you do need one hand on the mouse all the time and you use left hand just for shortcuts, the Dvorak would not be the best idea in my opinion.

I’m right handed, I’m not sure how effective is Dvorak for Left handed folks, but I bet there is lot of articles if you google them.

One argument against Dvorak I get a lot is that:

Well yes that’s a valid argument, however the question is what layout we are talking about? If QWERTY are we talking about US or GB version of QWERTY ?.

Here is a photo of a Belgium keyboard MacBook of my friend / colleague: 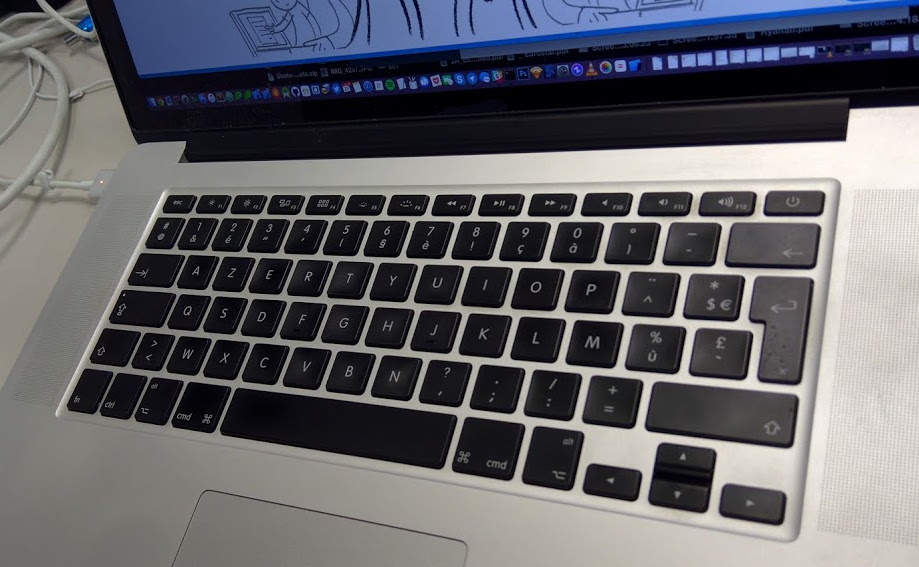 For me argument that “everyone should use EN QWERTY” in a multicultural City is more than nonsense (I live in London UK).

Now days there are better ways how to pair-code, like using CloudIDE or SSHing to a common VM or use tmux

I’m a tall dude with wide shoulders. When I’m typing on a keyboard it feels like all keyboards in the world wer design for much smaller people. Usually after few hours of working on regular size keyboard my wrists get into pain. This happens even with more expensive keyboards like Mac has.

There is a chance you’ve seen some people using ergonomic keyboards where the layout is split in half and curved on one monolithic board. 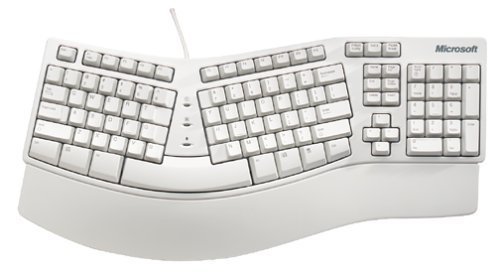 Ergonomic keyboard are improvement but not enough, plus they are usually large so they are not good for traveling.

I recommend split keyboards where layout is physically split to two boards, therefore user can positioned them anyway it’s comfortable for him/her. 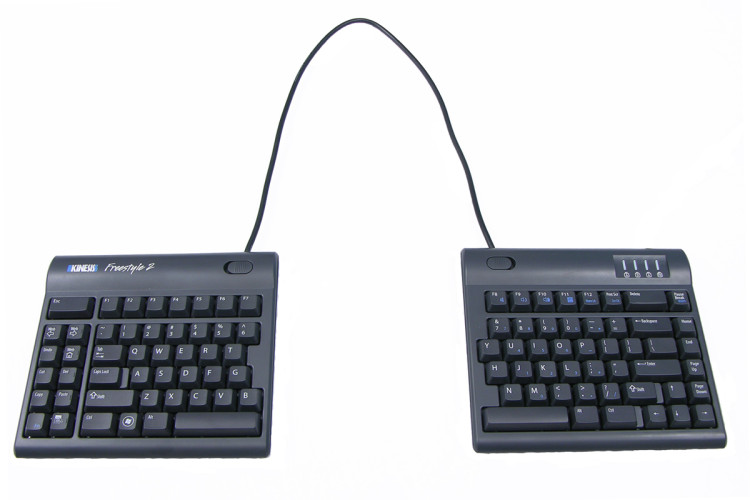 Split keyboards are awesome and good to travel with. Problem is that they are expensive (cheapest around $100). Solution I use and recommend is just to order two regular travel keyboards and use a USB hub to connect them. I went even further and I’ve cut of USB cables and solder them to USB hub cables. This way I’ve end up with $35 Split keyboard that I can use for pair coding on one computer if needed. 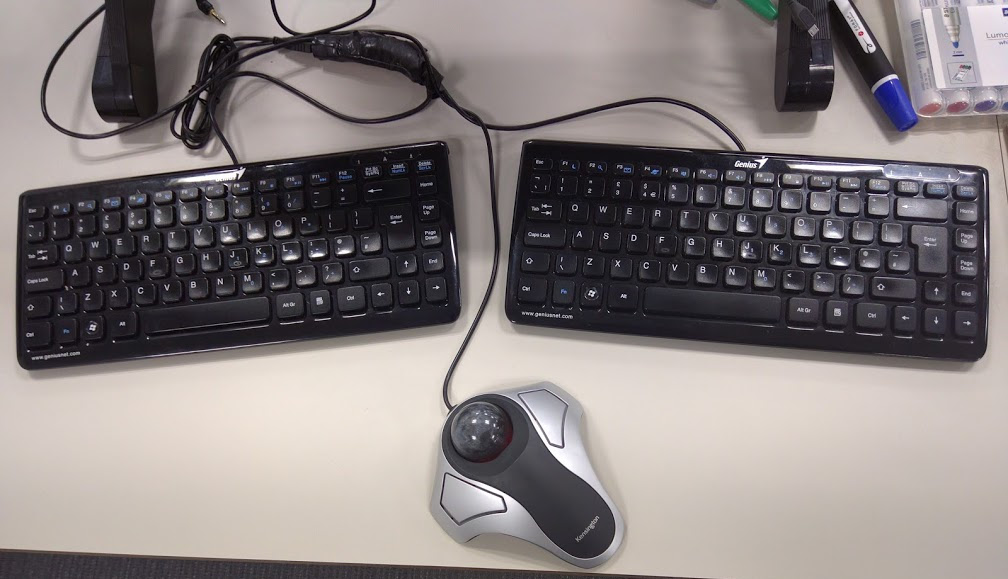 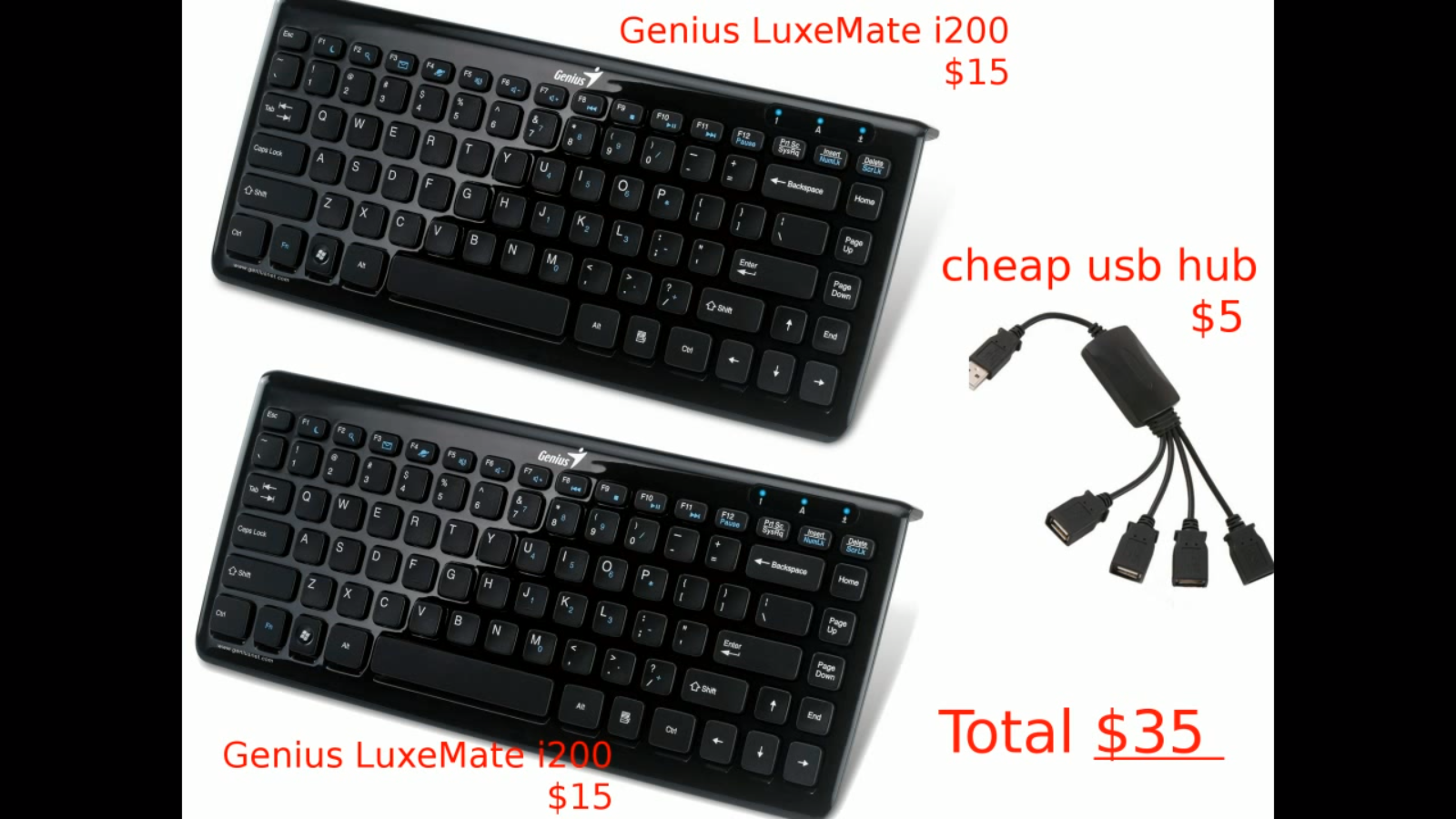 When I decided to learn Ten Finger Technique, I was starting to learn basics of Vim editor. As if this combination was not hard enough I thought to myself, hmm how about I teach myself Dvorak too. The transition was really hard, and for period of 2 weeks I had headaches, but it was worth it.

Dvorak and Ten Finger Typing Technique comes naturally together and Vim is awesome addition to this symphony. Vim is awesome when it comes to keyboard shortcuts limiting usage of Right Hand Pinky to minimum. Lot of people will reference Vim to a dinosaur and relique that only “old Linux Hippies use” but they never used Vim them self, or if they did they didn’t try any extension.

I’m just saying: try Vim for a week, but not with just basics. Learn split screens, visual selection, read some tutorials watch some screencasts, if you are a Ruby Developer install Janus Vim (collection of cool lib that will make your Vim proper IDE)

But really if you decide you want to use Emacs or Sublime editor it doesn’t really matter, just make sure you discover all the potential cool shortcuts that will ease your life, only that way you will truly benefit Dvorak and Ten Finger Typing Technique.

In any case be sure to focuse on quality rather than speed. Less errors when typing and then improving your speed. Play every morning typeracer