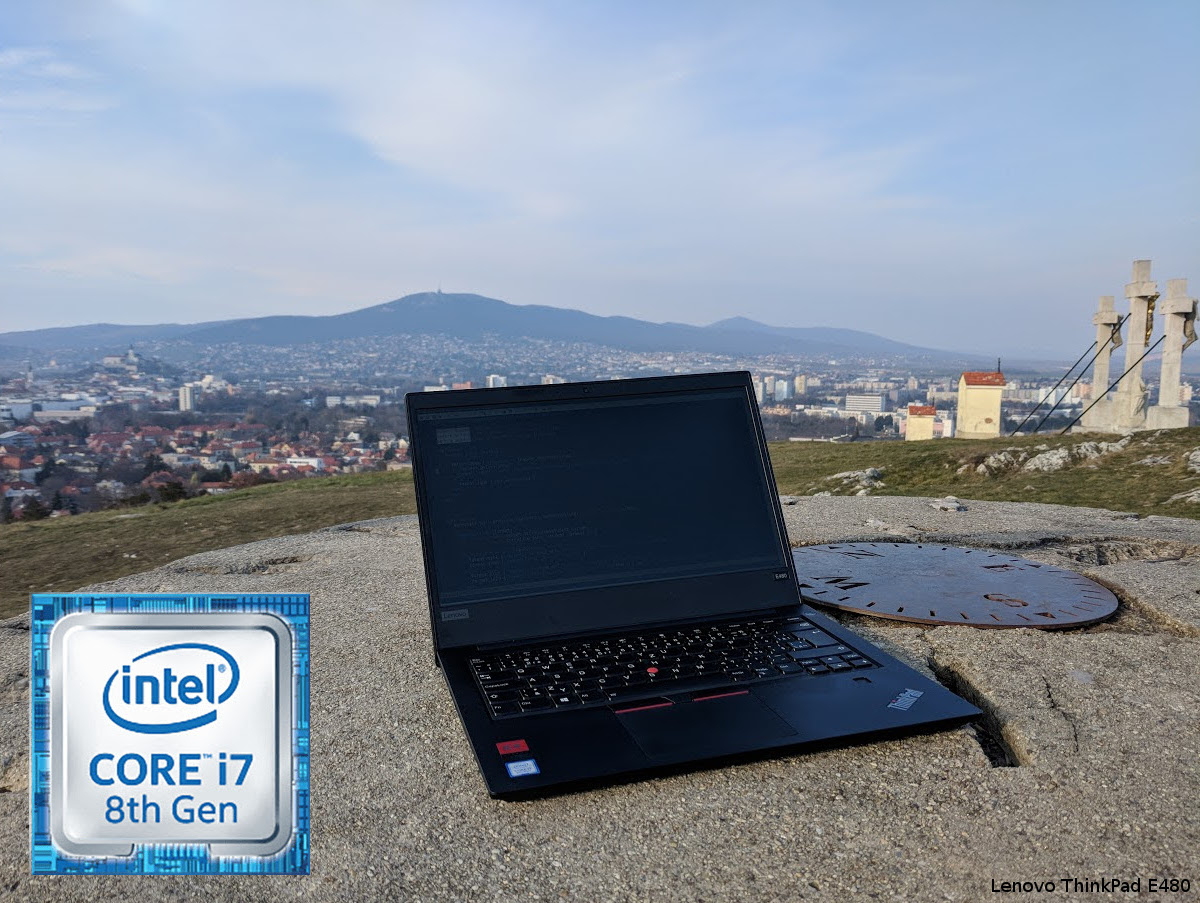 Here is my short review of Lenovo ThinkPad E480 laptop.

My main reason for new laptop was that I needed a laptop with good keyboad and touchpad with buttons (yep buttons). Reason for that is that I’m a web-developer I type 95% of the time and I need small touchpad so my hands don’t accidentally touch touchpad.

Reason for touchpad with buttons was because the remaining 5% of time I’m doing lot of photo sorting / Gimp editing and I find it non-productiov with Macbook Air and Dell XPS 13 touchpad.

And don’t worry that red joystick in between the G, H,B keys will not limit your typing. I type with ten-finger technique on a Dvorak layout. I write lot of code (Web-developer) and I have quite large hands and the joystick not bothering me at all.

One more important thing. There is a Delete button well placed (top righ corner) ! Coming from Macbook Air, to have Delete key is a luxurious feeling.

I spend 10 - 16 hours a day at a Screen (no that’s not a metaphor, I’m serious) Therefore good screen is a priority.

I can confirm this laptop has really good Anti-glare (mate) screen, however be sure to buy 1920×1080 one as apparently there is a version with “cheaper” lover resolution screen

Let’s be honest ThinkPad looks like something your grandpa should use. They are ugly duckling BUT they are designed for productivity.

You need to realize that this is a laptop built with plastic. If you looking for something more fancy and pretty you are at the wrong place. But I like how retro it looks.

I can confirm the body is reasonably good quality. It doesn’t wobble.

Some people were referring that the t480s model is much better build (as is should last longer). If you have extra $500 to spare on “better” maybe that’s better option for you. I’m happy with e480.

There’s a dedicated Radeon RX graphic card inside the laptop. I only play Dota 2 from time to time and for the first time in my life I was playing it with so many details. The laptop didn’t even spin the fan (unlike integrated Intel graphic card chips laptops). So not sure how well it will perform other games but Dota 2 was good enough (I left the setting on recommended, but it was definitely not minimum)

Graphic card performance was never my key point. If the dedicated card wasn’t inside the laptop I would still buy it. But now that it’s there I enjoy it.

What more can I say: I7 8th gen + dedicated graphic card.

The laptop comes with i5 and i7 option. Go with i7. Those extra $200 will do quite the difference.

Update 25.03.2018: D. Klos had good point that i5 version will have better battery life and it’s still 4 phisical cores. So if battery life is priority and you don’t need dedicated graphical card then i5 version is good choice.

I was running integration tests (complex Ruby on Rails application with 3 types of databases) + encrypting disk + lunching other heavy load operations while on WiFi and the battery still lasted like 5 hours.

I’m a web-developer I can confirm that typing code is really productive on this laptop.

One good feature of this laptop is that the screen is extended and starts 3cm from the base it will help you a bit not to hunch your back.

I use to do lot of cloud coding ( ref1, ref2 ) but past few months I had situations where internet was not availible therefore my machine was only way how to be productive.

I can confirm Ubuntu 16.04 is working out of the box. No issue. (I’ve manage to install Ubuntu without uninstalling Windows 10, just make sure you disable SafeBoot)

I can confirm XUbuntu 18.04 is working out of the box. No issue.

Touchpad works out of the box, camera, WiFi (unlike Dell XPS 13) No problems. Graphic card too.

Before this laptop I had Dell XPS 13 (late 2015 build). It was beautiful laptop but I needed to turn off touchpad each time I was writing code (my palms were detected by touchpad) I even installed several “palm detection” solutions nothing helped == beautiful but counterproductive (+ hardware issues like WiFi, sound card, …)

Plus my Dell XPS 13 Laptop snapped in 2 halves ! I was boarding a plane so I’ve closed the lid really quickly. When I opened it upon landing I found out the bottom and top part were separated from each other. The entire thing was held by 4mm thick aluminium stick that snapped in the middle (Think about how the screen part body is made from quite heavy metal base)

I fully take the blame. I should have been more careful. BUT it’s not like I throw the Laptop. The thing was designed by designers not by technical experts that’s for sure. That’s why I’m not recommending Dell XPS !

After that I’ve switched back to my Mac Book air 11 (2012 build) and reinstalled Ubuntu there. It was fine, no driver issues on Ubuntu but not really productive touchpad (again I need buttons). Also thing with MacBooks is that they gave glossy screens (not good for your eyes).

Before that I had company laptop HP Elitebook 4330 (2012 build) and that was the best laptop I’ve ever had! Good keyboard, antiglare screen, great touchpad (with buttons) firm laptop body, elegant, good Linux support.

I was therefore looking for HP notebook and I nearly bought HP ProBook 440 G5. It was pretty much all I wanted from a laptop BUT touchpad too big (I was afraid I would have palm detection issues) and no buttons.

Honestly I don’t trust Lenovo. They were caught several times for several years installing crapware to laptops (and even to bios !) and although that only affected Windows (which I would reinstall with Ubuntu anyway) the thing is I don’t like to buy stuff from such manufacturers.

But let’s put morals aside. I’ve searched the entire current laptop market and Lenovo e480 was the only one that matches all my expectations from a laptop (and for a good price).

So my message to Lenovo is: stop selling out your customers ! You are making great laptops you are just scaring away potential customers!

MacBook Air is fine but just a shiny gadget for that is not even close to these two laptops and Dell XPS 13 (late 2015) was a terrible waste of money.

Overall I’m satisfied with the notebook. I would buy it again.

I just feel obligated to provide full picture of the laptop - It’s not all rainbows and unicorns.

Like 7 months after my purchase had to take my Lenovo i7 to Lenovo repair center (there is one in my home town). There was a motherboard failture. The reclamation process was quite quick, within 2 weeks I had my laptop repaired and ready for pick-up. I didn’t pay anything as the Laptop was under warranty.

Note that I went to Lenovo store/repair center, not store where I bought the laptop. Reason is that some big re-sellers like to postpone the reclamation process to very last day they are allowed for some reason. In Europe we have 30day period for private owners, 40 days for company bought products. Don’t know why big re-sellers do this but happened to me every time I returned malfunctioned electronic product.

If this discourage you from buying one let me remind you that I’m not the most gentle with my laptops this may have been partially caused by myself.

12 months after usage the A key pop out of keyboard socket and could not be placed back. I think I broke some inner working of the key. I didn’t bother sending it to shop for repair, I just replaced key */& (I’m not using it) for the broken A key

Honestly it’s a mystery for me how I broke the A key as I was just typing not doing any strange experiments by replacing keys or something.

how to replace lenovo key on keyboard